Phillip Atiba Goff: How can communities reimagine their approach to public safety?

Phillip Atiba Goff is a professor of African American studies and psychology at Yale University. He is also the CEO and co-founder of the Center for Policing Equity, a university research center that analyses racial bias in policing. CPE also hosts the world's largest collection of police behavioral data in the National Science Foundation-funded National Justice Database.

Goff earned his B.A. from Harvard University and a Ph.D. in psychology from Stanford University.

This episode of TED Radio Hour was produced by Katie Monteleone. It was edited by Sanaz Meshkinpour.

Manoush Zomorodi
Manoush Zomorodi is the host of TED Radio Hour. She is a journalist, podcaster and media entrepreneur, and her work reflects her passion for investigating how technology and business are transforming humanity.
See stories by Manoush Zomorodi 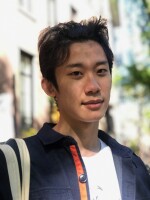 Harrison Vijay Tsui
Harrison Vijay Tsui is a news assistant for TED Radio Hour and How I Built This, where he researches, produces and promotes segments for both shows. Tsui joined as an intern in the summer of 2021.