Happy Holidays from all of us at KLCC! We've got a programming lineup packed with delights for the darkest days of the year with a variety of musical genres and moods. Consider this your program guide for what you'll hear.

Settle in warmly for the Eye 5 Holiday Special! We'll get a bit demented, go "drone" for the holidays, and play all sorts of sad and surprising songs of the season. Plus, you get the Eye guarantee for a Whamageddon-safe listening experience. Tune in, and Happy Holidays!

KLCC's David Gizara has been working on his winter beard for decades and he's bringing you a program of unlikely Christmas carols! You'll hear Sade's "The Sweetest Taboo," "Blood On The Rooftops" by Genesis, Low's "Long Way Around The Sea," and more!

3:00PM - All Songs Considered for the Holiday Extravaganza

We are revisiting the very first All Songs Considered holiday party from 2012. The guest list for this unforgettable program of music and tall tales includes Kishi Bashi, Dan Deacon, Carrie Brownstein and Nellie McKay. We hosted the festivities at a secluded cabin we rented one weekend in a snowy woods. It was a chilly night, but we had a roaring fire, plenty of eggnog, vegan haggis and lots of holiday songs to keep everybody warm!

This NPR favorite returns with the best of the best Hanukkah Lights stories from the last 30 years. Hosted by Susan Stamberg and Murray Horwitz.

Celebrate the return of the sun - and the warming of the heart with Paul Winter's Winter Solstice Celebration. On the darkest night of the year, we head back to New York's Cathedral of St. John the Divine to hear a performance of The Paul Winter Consort and the glorious Cathedral Pipe Organ. John Schaefer hosts.

The KLCC tradition is back! Tune in for a solstice celebration of Beatles songs by themselves and the musicians who love their music.

8:00PM - American Routes - Sounds of Winter Solstice and the Holidays

It’s the season of cold weather, darkness, solstice, and… holidays. Hanukkah, Christmas, Kwanza and New Years ahead. A time of celebration and contemplation, family and friends but also some broken hearts and Christmas blues. From cold weather and cold-hearted blues of Snooky Pryor, Big Maceo and Aretha Franklin to the warm side of the season with Louis Jordan and Ella Fitzgerald, Wille Nelson and Elvis. And Hanukkah sounds from Bela Fleck and Andy Statman. Plus, we explore Santa’s exploits, fallibility, and possibility with songs from Baltimore’s Fat Daddy, Tampa Red and Tennessee Ernie Ford. Merry Xmas and more from American Routes!

This week: A show about people celebrating Christmas firsts of all sorts. A guy who dresses up as Santa heads out to be tested in the real world. A film lover who never wanted to see “It's a Wonderful Life” finally buckles down and watches. An Orthodox Jewish family decides that they're going to celebrate Christmas just this once…and it blows their kids' minds. First Christmases…this week, on This American Life.

World Cafe is celebrating this season by revisiting special holiday performances from Sharon Jones and the Dap-Kings, Los Lobos, Andrew Bird, The Bird and The Bee, Pink Martini, Preservation Hall Jazz Band and more. Hosted by Raina Douris, this musical gift will provide a full hour of hip holiday cheer.

An updated version of a public radio tradition hosted by NPR's Susan Stamberg. Master comedian Jonathan Winters presents a distinctive reading of Dickens' holiday classic, with a special performing edition prepared by Dickens for his own presentations.

Tie a big bow on Christmas Eve with holiday music from the Grateful Dead, Jerry Garcia Band, and their friends. Downtown Deb will have the Yule log burning with festive tunes.

This year a radio tradition continues - stories from the NPR archives that touch on the meaning of Christmas. David Sedaris, Bailey White, John Henry Faulk--these and other NPR voices, past and present, tell stories of the season.

4:00PM - The Thistle & Shamrock Presents ‘A Child’s Christmas In Wales'

Cerys Matthews is Welsh musician and patron of the Dylan Thomas Society. In this program she narrates excerpts from the Dylan Thomas holiday classic, set to music that she created and recorded with her collaborator Mason Neely. One reviewer wrote: "Dylan’s words are so deliciously descriptive to begin with, and Matthews’ lilting Welsh accent, and deep understanding of the culture illuminates them further. Her love of Dylan’s poetry shines throughout, and serves to make it accessible to a wide audience." Hosted by Fiona Ritchie.

The Retro Cocktail Hour is a finger-snapping, hip-shaking blend of space age bachelor pad music, tiki tunes, private eye jazz and other incredibly strange music. Christmas comes to the Underground Martini Bunker on this round of the Retro Cocktail Hour. It's a cool yule with tunes by Andy Williams, Combustible Edison, Jaymz Bee and the Royal Jelly Orchestra, Dean Martin, Peggy Lee, Seth MacFarlane and many more!

Join us for a special holiday concert featuring the 20 piece choral ensemble Choral Cantigas. This musical performance also includes stories about holiday traditions and cultures. Hear a traditional Peruvian Christmas carol, folk music from Brazil, Spain, and Mexico plus Parrandas from Venezuela and Puerto Rico. The many rich styles of Latino choral music will unite listeners through the joyful and trans-formative power of music. Hosted by Felix Contreras.

Hosted by acclaimed storyteller Madafo Lloyd Wilson, A Season's Griot is an annual one-hour special that captures the tales and traditions of African American and African peoples. The show’s poet laureate, Beverly Fields Burnette, and other members of the Season’s Griot family return with familiar and favorite elements of Griot.

In an all-instrumental program, you'll be immersed in a soundscape for the winter season. We play music inspired by the season in all its quiet majesty and interior warmth. We weave these sounds into seamless sets of music perfect for that pause just after Christmas.

3:00PM - This Year In Music with Hanif Abdurraqib

Join host Hanif Abdurraqib for a special episode of Object of Sound, from PRX and Sonos, reflecting back on the year in music. December is the perfect time to look back on all the incredible music that has been released over the past year: the songs that moved us to dance, and the songs that helped us endure. Together with special guests Kelela, Sam Sanders, and Santigold, we'll review the musical highlights of 2022 and make predictions about the future of music in 2023.

As 2022 comes to a close, hosts Jim DeRogatis and Greg Kot reveal their Best Albums of the Year, music they loved and couldn’t stop listening to. They also hear selections from their production staff.

Grateful Dead played many New Year's shows over the years, and we'll highlight some sets as we say goodbye to 2022!

An NPR tradition every New Year's Eve since the 1970s, Toast of the Nation is the perfect audio complement for the occasion. It's festive jazz you can party to, all night long. Hear sets from Ibrahim Maalouf, Lizz Wright, Ranky Tanky and Chucho Valdés. The party goes well past midnight on KLCC! 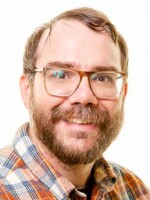 Jason Brown
Jason Brown joined KLCC as Program Director on January 30, 2019. Most recently Brown was Operations Director at KRCU in Cape Girardeau MO, and host of the music show Left of the Dial.
See stories by Jason Brown