A group that wants to bring back wild sea otters to the Oregon Coast is taking a big step forward. The federal government has awarded them a grant to launch a feasibility study for a possible reintroduction effort.

Once upon a time, sea otters were abundant along Oregon’s Pacific coast. But then fur hunters wiped them out more than a century ago. Sea otters were successfully reintroduced to California, Washington, British Columbia and southeast Alaska fifty years ago. But the animals have not naturally repopulated to Oregon in the time since.

The nonprofit that wants to restore sea otters to Oregon is named the Elakha Alliance, after the word for sea otter in the Clatsop-Chinookan language.

“Yes, they’re cute, but that’s not the reason we’re doing this,” said Bob Bailey, board president of the Elakha Alliance. “They’re a keystone species… The ecosystem and its productivity and its resilience off the Oregon Coast has undoubtedly been compromised over what it would be if they were here.”

Keeping The Urchins In Check

Among other things, sea otters keep sea urchins in check. Urchins mow down underwater kelp forests. So if sea otters came back, Bailey said you should get more kelp forests. Kelp provides shelter and food for a range of sea life and sequesters carbon.

Bailey said he was “totally thrilled” to win $40,000 in funding from the U.S. Fish and Wildlife Service to conduct a feasibility study of sea otter reintroduction in Oregon.

“It means everything to us,” Bailey said in an interview. “This is the keyhole through which the key will fit or not. Everything else will depend on the outcome of this feasibility study.”

Bailey described the upcoming April launch of the study to attendees at the recent annual meeting in Eugene of the Oregon chapter of The Wildlife Society, a professional group for biologists, ecologists and land managers.

U.S. Fish and Wildlife Service field supervisor Michele Zwartjes discussed the many issues on the minds of the federal and state agencies that will have the final say on the possible restoration of sea otters to the Oregon Coast.

“Do we have enough suitable habitat?” Zwartjes asked rhetorically. “Do we have sufficient prey? What will the effects be on the community and on other species?”

Zwartjes stressed that the Fish and Wildlife Service funding for the feasibility study is purely “exploratory” and does not presuppose an eventual green light for sea otter reintroduction. She said the human dimension to the matter would be “just as important” as the biological or ecological considerations.

“Is there public support for it? What would the effect be on local economies along the coast?” she continued. “There could be some positive effects and negative effects. But we think it is important to lay all of those out so the public is fully informed and understands what the potential ramifications of a reintroduction could mean.”

Super-cute sea otters could be good for tourism. But the fishing industry is wary. One of the things sea otters eat is Dungeness crab, which happens to be Oregon’s single most valuable commercial fishery.

“Sea otters have not reacted well with the fishery in other places,” he said, mentioning Alaska specifically.

There is also a modest sea urchin fishery in southern Oregon. Bailey said he has already been in touch with those commercial fishing boat captains, too. 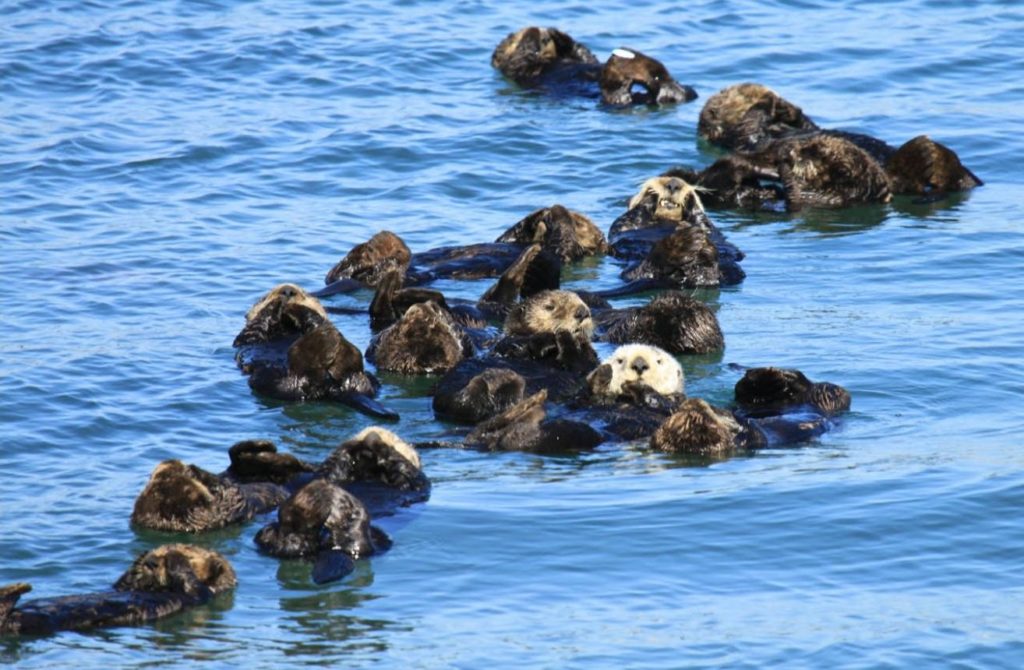 Both fans and skeptics are mindful that sea otters have a high metabolism and need to eat a lot to survive. Seattle Aquarium curator of conservation research Shawn Larson said they consume 25 percent of their body weight in food every day.

The Oregon coast is a busy place and not as pristine as it once was. Yet Larson, a longtime sea otter expert, said if otters can bounce back off central California, it can probably happen in Oregon too.

“That’s a very populated coastline around Monterey,” she said in an interview. “They found this estuary, Elkhorn Slough. They’re like, ‘Ok, it’s protected. We know there are a lot of people. We’re not sure what will happen. Let’s just put some otters there and see how it goes.’ Huge success. I think there’s now around 100 sea otters that live there.”

In BC And Washington

Larson is involved in monitoring the flourishing sea otter populations on the wild Washington and British Columbia coastline. The rafts of sea otters seen there now are descended from a small number of animals transplanted from Alaska between 1969-71. Sea otters released off of the southern Oregon Coast during the same time period mysteriously vanished after a few years.

Bailey said he hopes to have the feasibility study ready for public review in draft form by next winter. The Elakha Alliance said reintroduction studies, consensus building and permitting might add up to many years before any sea otters could possibly be captured from an as yet unidentified donor population and moved to Oregon.

A newly published study by a master’s student in the Marine Mammal Institute of Oregon State University found there is suitable habitat along the Oregon Coast to support around 4,500 resident sea otters, setting aside for a moment the potential disturbance from human activities. Oregon’s southern coastline with its many rocky headlands and bull kelp forests had the greatest amount of high quality habitat.

However, study author Dominique Kone cautioned that wildlife managers would have to consider a range of overlapping human uses that could influence the success of any reintroduction. He identified the sea urchin fishery as having the greatest interaction potential, along with other commercial fisheries, recreational boating, shipping traffic and wildlife watching.

Strong support for reintroduction comes from coastal tribes, notably the Confederated Tribes of Siletz Indians and the Coquille Indian Tribe. At the wildlife science conference in Eugene, Peter Hatch, a cultural resources technician for the Siletz tribe and an Elakha Alliance board member, described the importance of sea otters to his people. He noted that a luxuriously soft sea otter pelt was once one of the most valuable possessions a tribal member could own or give away.

“We find ourselves at a moment of opportunity,” said Hatch. “But so many things have to go right if we are going to eventually be able to bring otters back to the Oregon Coast.”

Sea otters were hunted to local extinction off the Pacific Northwest coast as part of the fur trade in the 18th and 19th centuries.

The Elakha Alliance recently got word that it won a second grant, this one from the Portland-based Meyer Memorial Trust. The two-year, $110,000 award will allow the Elakha Alliance to hire a communications and outreach contractor who will be assigned to build support for sea otter restoration along the Oregon Coast.