Ashton Eaton stayed on top of the leader board for nearly all of the two-day, ten event test of speed, strength and stamina. He accumulated 8,893 points, comfortably ahead of the second place finisher, Kevin Mayer of France, but shy of the decathlon world record (9,045 points), which Eaton set last year.

Eaton grimaced at the end of final event, the 1500-meter run. The thrill of victory took a while to replace weariness on his face as he congratulated the runners up, then hugged his wife and his coach in the first row of spectators.

"I wasn’t nervous, I was willing to run myself into the hospital if I had to," Eaton told reporters after the competition. He said good performances in the throwing events kept him on top.

"I remember I was taking a cold shower after the javelin and I was thinking, ‘Yea I would do it, I’d run into that.'"

The decathlon champion earns the unofficial title of "world's greatest athlete," though Eaton chooses not to flaunt that moniker.
The 28-year-old had a Northwest rival at these Olympics. Jeremy Taiwo of Seattle finished eleventh in the decathlon with 8300 points.

"I’m glad that I got to watch every second of it and she’s a massive inspiration for me," said Ashton. "For us to have done this together, I can’t put it into words.”

Brianne Theisen-Eaton represented her native Canada at the Rio Games. The couple met in college while both competed for the University of Oregon in track and field.

In other action of regional interest at the Olympic stadium Thursday, 23-year-old Ryan Crouser of suburban Portland putted the shot a personal best and Olympic record of 73'-10.6" (22.52m) to take home gold.

The Olympic shot put record that Crouser broke dated back a long time. At the 1988 Seoul Games, East German Ulf Timmermann heaved the shot 73'-8.6" (22.77m), a put that Crouser remembers reviewing on video many times.

“I’ve watched throw probably 10,000 times," Crouser told a Team USA writer Thursday night. "I thought that was one of the most beautiful throws I had ever seen. To break that record at the Olympics is truly special."

"Once I got into the ring everything really came together," Crouser continued. "It’s been a long road, and to get here and have everything go essentially perfectly, words can’t describe how I feel right now." 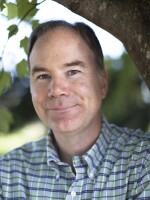 Tom Banse - N3
Tom Banse covers national news, business, science, public policy, Olympic sports and human interest stories from across the Northwest. He reports from well known and out–of–the–way places in the region where important, amusing, touching, or outrageous events are unfolding. Tom's stories can be found online and heard on-air during "Morning Edition" and "All Things Considered" on NPR stations in Washington, Oregon, and Idaho.
See stories by Tom Banse - N3