For 12 years, he was a Professor of Mass Communications at Washington State University.  His former student, KLCC Membership Director Kris Fox, remembers Dunne as "a demanding professor, both feared and respected in the halls of the Edward R. Murrow buildings at WSU."   Dunne was instrumental in boosting KLCC’s power in western Oregon.

He also was a World War II veteran, who served as part of the 10th Mountain Division as a skiing infantrymen, fighting German troops in the north Italian alps.

Angela Kellner
Angela Kellner is the KLCC host of All Things Considered and a reporter. Angela began as a KLCC volunteer in 1991 when she was in high school. While a student at Lane Community College, she was hired in 1993 for a work-study position in the KLCC Music Department and has been with the station in some role since then. Angela hosted KLCC's world music program Tropical Beat for 11 years from 1994 to 2005 and continues to fill in on a monthly basis.
See stories by Angela Kellner 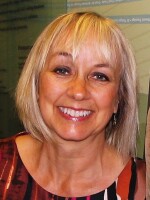 Kris Fox
Kris Lindstrom Fox has been with KLCC since 1981, becoming Membership Director in 1987. She has overseen the growth of KLCC membership to more than 6,000 members, and taken Radiothon from $18,000 in 1981 to $285,000 in 2013. She is also co-coordinator of the KLCC Microbrew Festival, held in Eugene every February.
See stories by Kris Fox