Crews have fought fire with fire to help secure the containment lines. One method you may not have heard of uses ping pong balls and helicopters. They’re officially called PSDs, or plastic spherical devices.

The ping pong balls have an accelerant inside. Different types ignite faster than others. It all depends on the terrain and type of burn they want. For example, slow burns allow for larger trees to not be damaged, but they burn fuels on the ground. The type of accelerant and amount of ping pong balls regulate how hot the fire burns.

Public information officer Doug Epperson says the ping pong balls are used to cover a wider area than what handcrews do.

“It actually comes out of a hopper, like when you see somebody play bingo. There’s a bunch of balls in there,” Epperson said.

Burning wider areas helps crews not have to worry about spot fires after they leave, especially in windy conditions, Epperson said.

A cold front blew into north-central Washington on Monday, bringing with it wind gusts of 20 mph.

Fire crews worked Monday to cut down hazard snag trees on the fire’s western edge. Falling snags are very dangerous to fire crews. The sawyers are clearing the snags before crews can go in and search for hotspots. 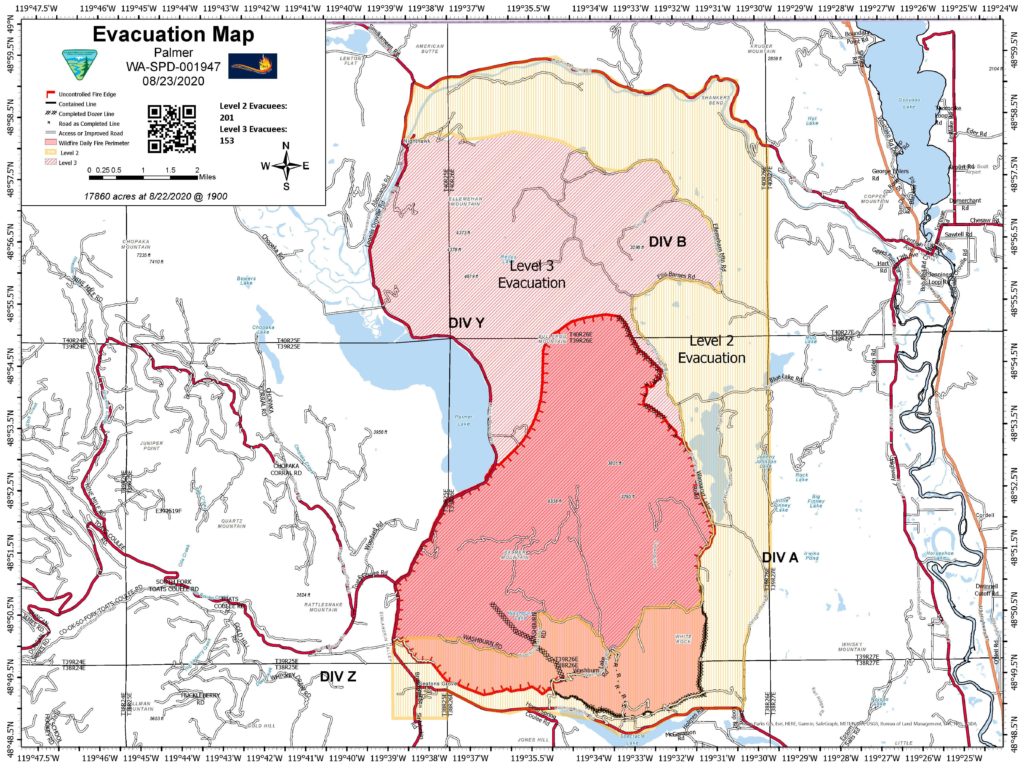 Evacuations are still in place for the Palmer Fire. Burnout operations took place over the recent weekend near Loomis, on the lower left edge of the fire. CREDIT: InciWeb

Crews also worked Monday to put a 300-foot radius around each structure to help protect them going forward.

Over the past weekend, the fire managers worked with ranchers to protect grazing allotments, Epperson said. He said they saved more than 200 acres of grazing land by using various techniques, like burning different areas or finding natural barriers for containment lines.

“There’s only so much land up here,” Epperson said.

Officials are asking people not to drive on closed roads. Epperson said they’ve seen a lot of people passing road closures. While there may no longer be flames in the area, he said there is a lot of heavy equipment in use. Firefighters are also using the roads to travel.

Managers are planning a virtual public meeting Tuesday, Aug. 25, at 6 p.m. They plan to update people on the status of the fire and take questions over Facebook Live from Okanogan County Emergency Management. People can submit questions in advance to 2020.palmer@firenet.gov.