Art for All Seasons: Woodblocks and Icons

This is Sandy Brown Jensen, and you're listening to Viz City, KLCC’s arts review program. You are warmly invited to this Friday's opening 5 to 7 p.m. of the Maude Kerns Art Center Membership Show called "Art For All Seasons.”

This show is designed with holiday art shoppers in mind. I'll be standing in front of a huge photograph of the star nursery called “Cosmic Cliffs.” I'll be there to greet KLCC listeners. Show me your favorite piece. Let's talk about it, and I'll feature a few listener favorites on my next Viz City.

On one of those cold gray days earlier in the week, Peter and I spent time at both the White Lotus and the Karin Clarke Galleries on Willamette Street in Eugene.

The White Lotus is showing “Art in the Time of Enlightened Rule: Woodblock Prints from the Japanese Meiji Era.” The layers of color, and sophisticated compositions are the most obvious qualities of these woodblocks, but my appreciation increased when I learned about the turn of the last century woodblock industry.

The usually anonymous artist sold an image to a publisher. The publisher hired workers, each of whom would carve just one of the color zones. Then other workers did the color registration and printing itself. It was an art conveyor belt where every worker was a trained artisan of the highest caliber. These amazing works were created by a whole community – it took a village to make a woodblock.

Across the street at the Karin Clarke, Eugene artist Olga Volchkova is blowing minds with her New Works show. Olga was trained in Moscow in the traditional art form of religious iconography – you know, the Saints with gold circles behind their heads.

Here in Eugene, Olga became a citizen botanist and got the idea to make icons of all her favorite plants like Fireweed, Potato, and Basil.

I love Saint Pea because the woman sitting on a bench surrounded by pea plants looks like me, and a face looking at a window seems like my inner child.

Which one is YOUR favorite? 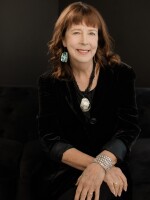