He died Saturday at the age of 93. Known as “The Schonz”, he called games for the NBA team for nearly three decades, which included the Trail Blazer’s big championship win in 1977.

Schonely was inducted into the Oregon Sports Hall of Fame in 1999. Appearing on KLCC’s Northwest Passage on July 12 of that year, Schonely was asked by host Claude Offenbacher how he maintained his enthusiasm.

“I miss – to be honest with you – the daily grind if you will, of doing the games, because that’s what I do, and love to do.”

Schonely’s sign-off was distinctive to all sports fans.

For nearly three decades, Bill Schonely was the “Mayor of Rip City”, announcing games for the Portland Trail Blazers. His final broadcast for the NBA team was in 1998, but he remained an ambassador and even had a desk at their Portland office.

Schonely died early Saturday morning at the age of 93. He talked about his career and love for sports on KLCC’s Northwest Passage in July 1999. Program host Claude Offenbacher began by asking Schonely how it felt to be inducted into that year’s Oregon Sports Hall of Fame, an honor usually reserved for athletes.

Special thanks to former KLCC reporter Claude Offenbacher for providing the archival recording of Schonely. 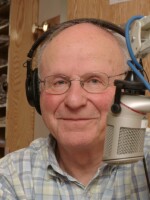